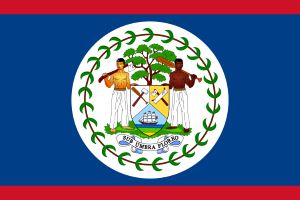 During the 1840’s, Great Britain declared the country a colony and called it namely British Honduras. Belize proceeded to gain its independence on September 21st, 1981, and since then, has operated as an independent nation under a parliamentary democracy.

Belize is located on the Caribbean coast of northern Central America. It shares a border tp the north with the Mexican state of Quintana Roo, to the west with the Guatemalan department of Petιn, and to the south with the Guatemalan department of Izabal. The area of the country totals 22,960 square kilometers (8,865 sq mi). The abundance of lagoons along the coasts and in the northern interior reduces the actual land area to 21,400 square kilometers (8,263 sq mi). Belize is shaped like a rectangle that extends about 280 kilometers (174 mi) north-south and about 100 kilometers (62 mi) east-west, with a total land boundary length of 516 kilometers (321 mi).

Belize is a parliamentary democracy, a Commonwealth realm, and therefore a member of the Commonwealth of Nations.

The structure of government is based on the British parliamentary system, and the legal system is modeled on the Common Law of England. The current head of state is Elizabeth II, Queen of Belize. Since the Queen primarily resides in the United Kingdom, she is represented in Belize by the Governor-General. However, the cabinet, led by the Prime Minister of Belize, who is head of government, acting as advisors to the Governor-General, in practice exercise executive authority. Cabinet ministers are members of the majority political party in parliament and usually hold elected seats within it concurrent with their cabinet positions.

The bicameral National Assembly of Belize is composed of a House of Representatives and a Senate. The thirty-one members of the House are popularly elected to a maximum five-year term and introduce legislation affecting the development of Belize. The Governor-General appoints the twelve members of the Senate, with a Senate president selected by the members. The Senate is responsible for debating and approving bills passed by the House.

Belize is a full participating member of the Caribbean Community (CARICOM), the Central American Integration System (SICA), The United Nations, and the Organization of American States. It is still in the process of acceding to Caricom and SICA treaties, including trade and single market treaties.

Belize has a private enterprise economy that is based on agriculture, agro-based industry, and merchandising, with tourism and construction recently assuming greater importance. In 2006, a crude oil field was discovered near the town of Spanish Lookout, which has presented new prospects and problems for this developing nation. The country is a producer of industrial minerals. Sugar, the chief crop, accounts for nearly half of exports, while the banana industry is the country’s largest employer.

Rapid action has been made by the government to improve tax collection, but a lack of progress in reining in spending could bring the exchange rate under pressure. The tourist and construction sectors strengthened in early 1999, leading to a preliminary estimate of revived growth at 4%. Infrastructure continues to be a major challenge for the economic development of Belize. Trade is very important for the country and the major trading partners are the United States, Mexico, the European Union, and Central America.

WHY CHOOSE BELIZE WHEN STARTING A BUSINESS?

Belize has a gentle climate, tropical beauty and relaxed way of life which are a lure to many, whether retired, close to retirement, or still actively involved in business in order to start a business. Since English is the official language of the country, you can negotiate in English, advertise in English and search the Laws and Records easily.

The following are the advantages of starting a Business in Belize:

The Registry Agent will check the name availability of the company (whether there is no company under such name already). In Belize the law requires that all financial service providers know the identity of their client so the actual contact details must be indicated at the Registry Agent. This information remains confidential.

Requirements for the Registration of an IBC

Required Documents to register the company:

When all the details are confirmed and the payment for the relevant fees received, the Registry Agent will prepare the Memorandum and the Article of Association of the new International Business Company. These will be filed with the Registry of International Business Companies in Belize. There is no need to sign any statutory info, the initial company formation documents are prepared and signed on your behalf by the Registered Agent always under the procedures set by the Belize International Companies Act. The Registered agent will file the corporate documents of the company, will pay the applicable registration fees and arrange for the documents to be submitted to the Belize Registrar of companies for registration. All the relevant documents will be kept in the Registered Agents office.

Corporate documents of an IBC

In addition an annual renewal fee must be paid to the Belize government. Starting from the second calendar year after incorporation the fee is due before the 31st July each year. If the fee is not paid then the company will lose its status of good standing and a 10% penalty fee if it is overdue for less than 3 months or 50% penalty for over 3 months. An annual professional fee must also be paid to the Registered Agent which is also on a yearly basis.

Disclosure: No.
Bearer shares: Permitted but immobolised with local registered agent or foreign professional intermediary.
Minimum number: One.
Public share registry: No.
Meetings / frequency: As desired by directors or members.

Annual return: No.
Audit requirements: No.

Registered office: Yes.
Domicile issues: Continuation of IBCs or LDCs to Belize.
Company naming restrictions: No company shall be incorporated under the Act under the name that contains the words: assur­ance, bank, building society, trusts, Chamber of Commerce, insurance, municipal, royal, fund, or investment management.