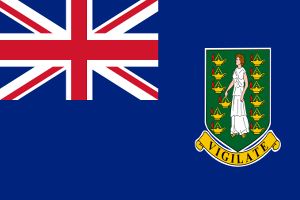 The British Virgin Islands (BVI) is a British overseas territory, located in the Caribbean to the east of Puerto Rico. The islands are a British Crown Colony that became self-governing in 1967. The BVI are autonomous of the U.K under its constitution, except for issues regarding its external affairs, defence and internal security.

The British Virgin Islands consist of the main islands of Tortola, Virgin Gorda, Anegada and Jost Van Dyke, along with over fifty other smaller islands. Approximately fifteen of the islands are inhabited. The capital, Road Town, is situated on Tortola, the largest island which is approximately 20 km (12 mi) long and 5 km (3 mi) wide. The islands have a total population of about 26,000, of whom approximately 18,000 live on Tortola.

The islands were settled by the British which is why English is the official language of the BVI and the U.S dollar is the official currency. The main industry is tourism, and there is a long tradition of economic and political stability. In addition, the islands enjoy the advantage of a modern communication system. Telephone, cable, telex, telecopy and courier services are all excellent and the islands are easily accessible by air travel through San Juan, Puerto Rico.

Executive authority in British Virgin Islands is vested in The Queen and is exercised on her behalf by the Governor of the British Virgin Islands. The Governor is appointed by the Queen on the advice of the British Government. Defence and Foreign Affairs remain the responsibility of the United Kingdom.
A new constitution was adopted in 2007 (the Virgin Islands Constitution Order, 2007) and came into force when the Legislative Council was dissolved for the 2007 general election. The Head of Government under the new constitution is the Premier (prior to the new constitution the office was referred to as Chief Minister), who is elected in a general election along with the other members of the ruling government as well as the members of the opposition. A Cabinet is nominated by the Premier and appointed by the Governor. The Legislature consists of the Queen (represented by the Governor) and a unicameral House of Assembly made up of 13 elected members plus the Speaker and the AttorneyGeneral. The legislative council consists of the four ministers and the nine other elected representatives. The legislative council is presided over by a speaker elected from outside the council.
The Judicial System is under the direction of the Eastern Caribbean Supreme Court, which includes the High Court of Justice and the Court of Appeal. The Final Court of Appeal resides with the Privy Council in England. The legal system is based on British Common Law and statute enacted by the locally elected legislative council when signed and approved by the Governor.

The British Virgin Islands economy is primarily dependent on Tourism and financial services. Tourism is the more important of the two, as it employs a greater number of people within the Territory, and a larger proportion of the businesses in the tourist industry are locally owned. Tourism revolves around diving, yachting and cruise tourism. On the other hand, financial services associated with the territory’s tax haven status are by far the more important. 51.8% of the Government’s revenue comes directly from license fees for offshore companies, and considerable further sums are raised directly or indirectly from payroll taxes relating to salaries paid within the trust industry sector.
Substantial revenues are also generated by the registration of offshore companies. As of June 2008, 823,502 companies were so registered. Since 2001 financial services in the British Virgin Islands have been regulated by the independent Financial Services Commission.
Agriculture and industry account for only a small proportion of the islands’ GDP. Agricultural produce includes fruit,
vegetables, sugar cane, livestock and poultry, and industries include rum distillation, construction and boat building

WHY CHOOSE THE BRITISH VIRGIN ISLANDS WHEN STARTING A BUSINESS?

The British Virgin Islands Business Companies Act oversees the rules and regulations necessary to start and operate a company in the British Virgin Islands. Since the Companies Act of 1985 and the International Business Companies
Ordinance of 1984 have been passed, more offshore companies have been formed annually in the BVI than anywhere else in the world. Known as an International Business Company, the IBC cannot trade within the BVI or own real estate
there but can trade anywhere else in the world and IBCs from the BVI are well-known and well-respected everywhere.

The following are the advantages a someone can acquire from choosing the British Virgin Islands to start a business.

Advantages of the Jurisdiction of The British Virgin Islands

How to form a British Virgin Island Company

Requirements for the Registration of an IBC

Corporate documents of an IBC

* Power of Attorney will be given when we act as Nominee

The BVI is by far the most popular jurisdiction in the world for IBCs because it provides the best combination of those qualities that the international financial professional seeks out when establishing an IBC company for his clients.

Annual return – No.
Audit requirements – No.

Registered office – Yes, must be in BVI as must be the Registered Agent.
Domicile issues – Re-domiciliation to and from BVI allowed under BVI law.
Company naming restrictions – Restricted words such as ‘Banking’, ‘Insurance’, ‘Fund’, ‘Trustee’ will not be allowed without rel­evant licence.

First Half Year Companies (incorporated between January and June):

Second Half Year Companies (incorporated between July and December):